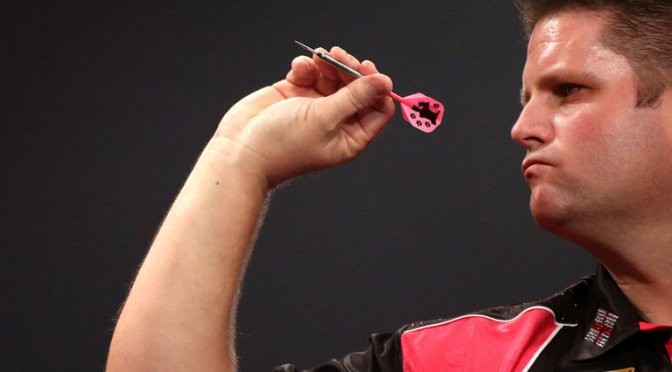 Local Hero to Champion of the World? It could happen you know. Scott is now into the last eight of the BDO World Darts Championship. He’s never made it this far before – his first three years ended in first round defeat, then the last two years have seen second round exits and now a place in the quarter-finals for the first time and playing with determination and grit could just see him go all the way.

Scott’s first round victory made headlines for its drama and excitement – a sudden-death leg victory over many people’s favourite for this years title, Tony O’Shea.

Many of Scott’s fans, me included, were hoping for a slightly more straightforward match against Geert de Vos, the unseeded Dutchman who had also never progressed past the second round at the World Championships.

The start of the match didn’t go quite as smoothly as Scott would have hoped. Despite winning the first set, Scott seemed to lose concentration and some control in the next two sets, going 1-2 down and not having found the groove at all.

Geert won seven-out-of-nine legs on the way to winning those two sets – combined this with Scott’s apparent loss of concentration and the signs were ominous for the Dorset man.

Turning of the Tide

After his purple patch, Geert just seemed to totally lose his way, scoring 5, 7 and 31 in quite quick succession. Scott sensed that the tide was turning, dug deep and found the form that saw him win 5 ranking titles in 2014.

Scott cruised to victory in the end, winning the match 4-2 and booking a place in the quarter-finals against Brian Dawson in tomorrow afternoons session (9th January from 1pm on BBC2).

Good luck tomorrow Scott – everyone around here is right behind you.

Life as a Run-of-the-Mill Dart Player and Fan

This site has been clicked...